We haven’t had the chance to film with Firas today so I hope you don’t mind a big update from me.

As you know, over the past week we have been running the second stage of Design Validation Testing (DVT#2).

The news coming back from the production line is very positive and I’m excited to share some of those results with you now.

RECAP:
DVT#2 is the last stage in order to qualify the Carbon 1 smartphone for Founder Edition and mass production. This includes final testing and certification.

During DVT#2, the assembly line built the first 80 devices.

Watch DVT#2 in action below.
Please don’t be alarmed by the ‘Founder Edition’ placement on these Carbon 1 devices. All early devices have Founder Edition on them, these are not for customers.

DVT#2 FINDINGS:
The results of DVT#2 have been incredibly positive.
As expected, we have found some challenges still to solve but these are minor and putting the Founder Editions into production is very close.

Here are the highlights.

SUCCESS YEILD RATE:
We achieved a 93% success rate in the devices that came off the assembly line.
This means, working devices with software and hardware working well and no problems with all core functionality.
All antenna challenges are solved. The team even calling Firas using 4G connection to excitedly announce the success of the DVT#2 build.

The reasons for the 7% failures have been identified and most commonly have been due to defective components or damage during assembly as the team learn how to build the device.

CERTIFICATION PRE-TESTING:
During DVT#2 we started the pre-testing process for CE and GMS (Google Certification).
The device passed on both counts and signifies that we have a market ready device.

OUTSTANDING CHALLENGES:
There are still some minor challenges to solve before we put Founder Editions into production. The good news is, these are predominantly software related and should be easily fixed. One example is we can hear a small echo when making a call.

The one hardware issue remaining is minor but it is a headache for the team next week to resolve. The adhesive used for the fingerprint is inconsistent and needs to be reviewed.

NEXT STEPS:
There is a production meeting on Monday to discuss the outstanding issues and routes to resolve them.

The team is working incredibly hard but with genuine excitement following these results.
We expect to have a clear idea of the timeline by the end of next week (11th Dec) and will share a full update.

In the meantime, the mainboards for Founder Editions will start being assembled from Monday. This is a major step forward for the Founder Edition production

Everyone is feeling confident that Founder Editions can be put into production very soon – Christmas is looking out of reach but it could still be possible depending on what can be resolved in the week.

Finally, we wanted to share some nice images of the Carbon 1 MK II meeting its box for the first time. I hope you agree, the unboxing experience is going to be quite special 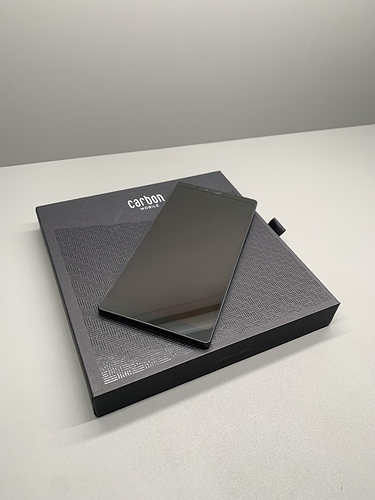 Great to see the assembly team at work. The phone & packaging with the carbon fiber stripe optics look really good. Thank’s for keeping us informed about the positive technical progress. Good luck for solving the last issues & hopefully the delay will keep within a limit.

The certifications are through, that’s definitely something.
Adhesive is more difficult than it sounds, but maybe you’ll be lucky.
Software can (and should) still be improved after delivery.
My impression is that you are better on schedule than I had expected.
Congratulations for that.
Christmas would be nice, but some things can’t be forced.
Anyway, I wish you all the best for the final steps.

This is very good news. It is impressive to take a look at the production.

Wow Jamie, many thanks to you and your team! I’m very happy to see real progress. Naturally It’s allowed to have some final small problems.
But I don’t care… after such a long time it’s really great to see the Carbon I on its final lap

The original posted video used to be a bit longer I guess.

Yes, we’re really happy with these latest devices.
They are looking beautiful.

@Thom - good spot. We shortened the video slightly as there are elements in the build of the device that is best held back to be presented in the dedicated Founder area of the forum only. We will be launching content in the Founders forum soon in the lead up to launch.

Thanks for the updates and your efforts.

Any chance to get the Carbon 1 MK II in hand before the new year? 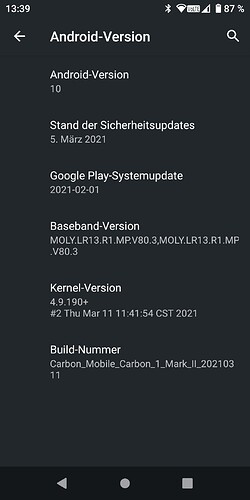