I’m not even mad… 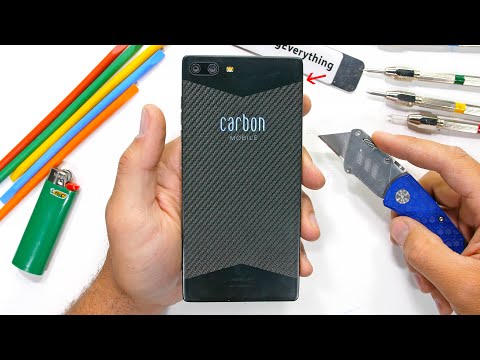 It‘s interesting to see the inside of the phone, especially the less capacity of the battery (@firascarbonizer: how much mAh is really built in ?) But also it’s terrible to watch how it’s being damaged.

It’s definitely been a double edged sword watching this one and so incredibly painful to watch the break.
The Carbon team have been watching this closely.

On the negative side of course it’s a shame that his version of reliability testing is to snap the phone in this way. For those of you that might be concerned, I can happily tell you that we passed the industry standard test which simulates over 2000 ‘sits’ of a phone in the back pocket.

On the plus side, he is incredibly supportive of the innovation.
We loved that he showed the true carbon fibre side of the device.
He is right, we absolutely utilised the thinnest carbon fibre possible & it’s important to say we haven’t promoted as a rugged phone. It’s a shame the title ‘How Strong Is A Carbon Fibre Phone’ infers that we have tried to market in this way.

The response has actually been pretty huge for us, we had a 400% increase in traffic and newsletter signups and seeing sales come through as well.

On the battery front - our battery is 2,850 mAh Min / 2950 mAh typical. It is normally the latter that companies advertise, we had rounded it up as many companies do. The 2,800 mAh is actually a supplier mistake in printing and future devices won’t have this shown.

To summarise, all exposue is good exposure. But yeah, don’t give your phone to a man with big American hands that likes breaking stuff as it won’t last long.