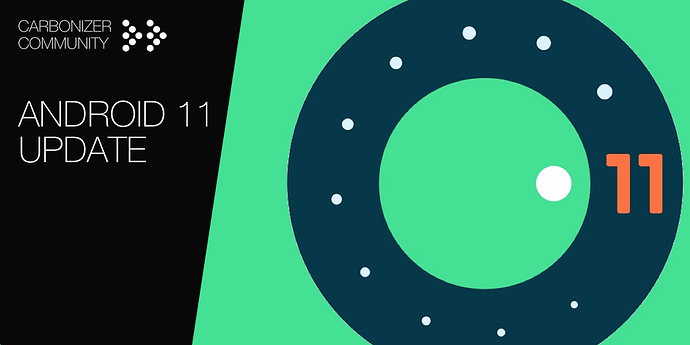 Please allow me to introduce Aike, AKA @carbonpd - Aike is our brilliant Product Director who has been working behind the scenes to manage the updates for your Carbon 1 MK II as well as leading on all new product development.

Thanks @jamie. I know that many of you have waited for this update for a long time and I can assure you, we have been working hard to get Android 11 out. At the moment, we are in the process of certifying the update with Google. A process that can take up to two weeks.

The Carbon product team has been able to beta test the release candidate version on their devices and we are very happy with the improvements that have been made.

To give you a small glimpse on what happens before you are able to push the update button: Upgrading the OS on a smartphone is a challenging task. The good news is that a large part of the basic functionality of Android is developed by Google and the open source community and is the same for all devices. A lot of the lower level drivers and bits that are close to the hardware are very specific to the chipset and the peripherals of the device (think of CPU features like acceleration, display driver or camera driver).

A lot of technical expertise, development as well as trial and error and requesting help from the chipset manufacturer goes into it.

On top of that the UI/UX customizations and themes need to be integrated with the new OS design language and look and feel.

This is followed by extensive testing by humans and machines before we can finally go to certification and publishing.

The result, however, is worth the wait. Here is an excerpt with the most exciting features from the release notes:

So please sit tight. Great things are around the corner… 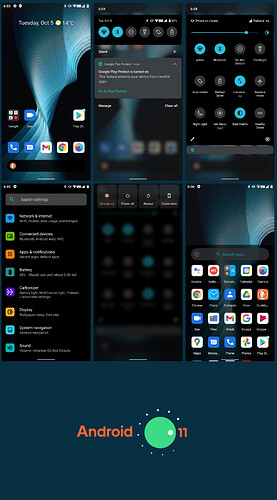 Thank‘s for all the effort being done to provide those updates.
I‘ve got a question: will it be possible to remove the google search bar from the screen ?

Thank you very much Jamie for this new information.

Thank you very much for the detailed information regarding Android 11 Update.
Hopefully the wait for the update has now come to an end.

Great! Looking forward to the update.

Thanks for the feedback. The bar is part of the launcher (the application that runs all the time and that displays the icons and widgets) . To remove the bar could 1. install a different launcher (which can be done from Google Play) or 2. If you just don’t like Google replace your default search engine (like I have done in the screenshots).

Thanks! There is a new camera app which should improve the user experience. I’ll get back to you on the Youtube issue.

Unfortunately, I have bad news to share regarding the timeline of the Android 11 release. We are facing an extra delay of 3 to 5 weeks.

I understand how frustrating this is for you and we are working on getting it out as sooneas possible. It has the highest priority but we are facing the reality of the processes at play.

We have (all) been quite dissatisfied with the performance of our Over The Air Update (OTA) partner. In order to improve this situation we are transitioning to a new partner. We expected that the the old partner would have been able to complete the update certification process before the transition deadline and push the update out on their license.

Frustratingly, they have failed to do so. We are picking up where they have left off but it will take time to handle the transition.

I hope you can understand the situation that we are in and trust that we are working on improvements for future releases.

That’s cool. Since over 6 month you are working on the upgrade. And now you start rethinking your OTA strategy??? Maybe you should take care getting managers and people with kowlage about project management.

Thanks for your patience, Uwe and for your suggestions. We will take that into account when evaluating the project. Furthermore,we are working on improving the software team as well.

Looking forward on the update.

Congrats! I’m sure you’ll love it if you don’t run into the low sound or Wi-Fi signal issues.

Word of advice, the phone is very slippery so be careful!
For someone that didn’t drop their phone a single time in 5 years, I dropped the Carbon probably 8 times in the first two months. You get used to how it feels though so I don’t drop the phone anymore. But now my Carbon is dented so I’m looking forward to trading in for the Mark III.

Enjoy your phone and best of luck!

Just a quick update as the last one has been some time ago. The new update partner has cleared all administrative hurdles and has re-tested the update internally. On Nov, 1st the update was provided to the 3rd party lab that is certifying it against the Google standards. That process is a bit of a black box to us but we expect to have a result in the coming days. Thanks again for your patience. I’ll let you know as soon as I have news from the lab.

Just for my understanding: Adapting the OS for the phone is not valued as a core competency of the Carbon Mobile company or why do you need partners for this?

OK @carbonpd, so “the coming days” apparently meant something >14.

Any update on this? As far as security patches go, we are still on the level of August 5, which makes me a little uncomfortable. Please push either Android 11 or the missing patches for Android 10, if 11 should have been held up somewhere.

Yes, please tell us something new.

A quick update. Thanks again for your patience. It took a bit more time than anticipated but the update is near. One of the reasons it took more time is that we encountered a regression in the performance of the fingerprint sensor.
The sensor is noticeably slower than on Android 10. Definitely not unusable but slower. We are working on a fix and we tried to include it in the update but we were unable to do so. The improvement will come later. At this moment we don’t have a release date for that.
We will make the update available on Tuesday. We will include the issue of the fingerprint sensor in the release notes.
There will be many benefits including performance improvements, security patches and improved camera performance and the features mentioned above.